My grandfather, a lawyer and a former government official was among the pioneer Kamuning residents. He said that all the original residents of  Kamuning are public servants or government employees like him.

From childhood stories told to me by my parents and grandparents, Kamuning was named as such because the dominant trees in the area are the "Kamuning Trees", they also said that Kamuning was formerly called Barrio Obrero, and also referred to this area as Project 1.

I love how the the story goes that the former Philippine President Manuel L. Quezon was standing in Kamuning while envisioning the future Quezon City.  Now I know that he was standing somewhere in Tomas Morato Avenue (then Sampaloc Avenue) while he surveyed the breathtaking view of Kamuning.

Now I wondered about our former president's photo below... was he sitting in Kamuning when this photo was taken? or was he looking at Kamuning - admiring the view? 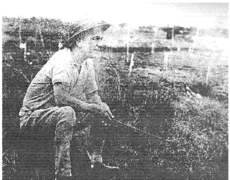 "Early one day in July, 1939, when the sun came out after a long spell of cloud and rain, Quezon strolled along the Diliman area with his friends, including Eulogio Rodriguez, Sr., then secretary of Agriculture and commerce, Alejandro Roces, Jose Paez, and Antonio G. Sison, who was then the dean of the College of Medicine and director of the School of Hygiene and Public Health of the University of the Philippines.

Standing on a grassy promontory, not far from where Sampaloc Avenue (now Tomas Morato Ave.) is now, about 200 feet above sea level, he surveyed the northeastern sweep of Kamuning, and he was so awed and inspired by the incredibly breathtaking view that he exclaimed: “This is where I would like to build a real Filipino metropolis!”…"

Kamuning was originally a part of the old town of San Juan:

"Quezon City was carved from the towns of Caloocan, San Juan, Mariquina, Pasig, Montalban and San Mateo. Under Commonwealth Act No. 502, known as “An Act to create Quezon Ctiy” specified the boundaries of the new city: included in its 7,355 hectares – one third of which was owned by the government were the following places, the barrios of Galas, La Loma, Sta. mesa Heights, San Jose, Balintawak and Kaingin were taken from the town of Caloocan; the barrios of New Manila, Cubao, San Francisco del Monte, Kamuning and Roxas were taken from the town of San Juan."

Early transportation to and from Kamuning:

"For the convenience of the residents of Kamuning, President Quezon arranged that the Luzon Bus Line of the Manila Railroad Company run a service between Kamuning and Manila at a bus fare of P0.05 only."

The very first Holy Mass & how Kamuning got its name:

"The very first mass ever held in this area was celebrated on Christmas ever of 1940. It was officiated by Reverent Koodring, a SVD priest from Christ the King Seminary, along España Extension.

The Church was beautifully decorated with Kamuning branches and leaves. The pungent fragrance of the tiny white flowers permeated the makeshift chapel as the mass went o. Those who attended the mass were impressed by the heart stirring beauty of the Kamuning – decorated alter that, after the services, while the whole world was echoing with joyous harmonies of Christmas sounds and greetings, the residents of Barrio Obrero decided to petition the People’s Homesite Corporation to change the name of their area to Kamuning. This was just right, they said, for indeed, they were not obreros or laborers; most of them were actually government employees with white collar jobs.
No one knows what action the Corporation took regarding the petition, but after that memorable Christmas Eve, nobody called the place Barrio Obrero anymore."

In the early 1960's a portion of Kamuning (i.e. Scout Area) was made into a new barangay called "Sacred Heart".  The barangay was named after the Sacred Heart Parish Church, a catholic church founded by the Divine Word Missionaries (SVD) Congregation also found in the Scout area, on the streets of Scout Fuentebella, Scout Ybardolaza, and Scout Fernandez.

Barangay Sacred Heart is also known as the "Scout Area" as most of its streets are named after the boy scouts, veteran scouts and chaperons who  died in a plane crash en route to the 11th World Jamboree in Greece on July 28, 1963.